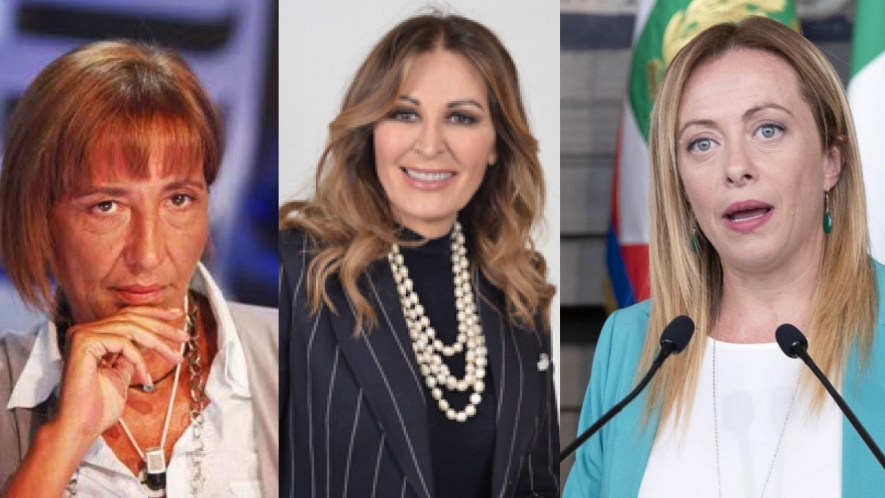 Feminism in the discourse of right-wing female MPs

Elia A.G. Arfini An analysis of what Meloni, Perina and Satanché said or wrote in ten years in office

“We should all be feminists” is not a soixante-huitard slogan. These are the words printed in black on a white t-shirt by Christian Dior. This item of clothing is available on the website of Dior fashion house for no less than 860 dollars.

In the past fifty years, the feminist discourse has changed considerably, expanding beyond traditional demonstrations staged by left-wing protest movements and milieus. Is there a right-wing variant of feminism, too? A qualitative study conducted by scholars from the universities of Milan, Milan-Bicocca and Bologna answered in the negative: right-wing feminism is an oxymoron. The study consisted in the analysis of what three women from the right wing of the Italian Parliament – Giorgia Meloni, Flavia Perina, and Daniela Santanché – said or wrote between April 2008 and March 2018. Here is what the research revealed.

From Beyonce to Ivanka Trump: feminism across the board

In the Global North, “second-wave” feminism – which led to the advancement of women in the labor market, politics, and culture, as well as to more legal rights for women in the 1970s – has waned. Feminists mobilized for a change in the sexual division of labor, in the organization of social reproduction, in citizenship rights, in the quality of cultural representation. This fight is traditionally associated with left-wing or progressive politics. Today, feminist and gender issues are championed by the likes of Beyoncé and Ivanka Trump, too. Corporate brand Dove – a personal care giant owned by Unilever – promotes educational campaigns on beauty as a source of self-confidence. This across-the-board expansion of feminist messages is riddled with contradictions and paradoxes as the feminist goal of systemic social justice is pursued in areas that foster exclusion, oppression, and inequality.

The debate on feminism and gender has extended to celebrity culture and neoliberalism, as well as to the political culture of the conservative right. Today, several right-wing parties in Europe encourage their female members into leadership positions: Marine Le Pen in France, Rocío Monasterio in Spain, Frauke Petry in Germany, Beata Szydło in Poland, Siv Jensen in Norway. In Italy, too, right-wing women have begun to talk about feminism: Giorgia Meloni, Flavia Perina, and Daniela Santanché are three notable examples. Let us see how and how successfully.

Background: populism and the economic crisis

The 2008 financial crisis has exacerbated class and gender inequality, spilling over into the economic, fiscal, and political spheres. Many lower middle-class families were put at risk of poverty, and trust in democratic governments, institutions, and leaders dropped. New forms of populism took center stage, mobilized resources, and became high-consensus. Both populism and the economic crisis have an inherently gendered dimension: they affect men, women, non-cisgender and non-heterosexual people differently, and reinforce heterosexuality and the gender binary. Precarity and poverty have had a different impact on men and women, to the detriment of the latter. At the same time, occupation has become increasingly feminized, especially in the tertiary sector. Employees’ traits that are usually associated with womanhood – conflict mediation, work-life balance, emotion management – are increasingly valued by employers.

In Europe as well as in Russia and in the U.S., a constellation of far-right groups, Christian fundamentalist movements, anti-abortion organizations and associations promoting traditional family values have started anti-feminist campaigns and promoted sexist and homo-lesbo-transphobic policies. The UN-coordinated 1994 International Conference on Population and Development in Cairo and the 1995 World Conference on Women in Beijing enshrined a shift in the global political agenda. In reaction to this, anti-feminist movements have been promoting a conservative agenda on reproductive rights and sexual citizenship. Scientific research on gender issues has also been targeted as “gender ideology” and as a threat to traditional family values.

At the end of 2008, Italy ranked 67 out of 130 countries in the Global Gender Gap Report. In the 2018 report, Italy ranked 70 out of 149 countries. The present study spans over the same time frame. In that period, the Berlusconi IV cabinet heavily influenced gender politics in Italy, even though women’s right legislation remained substantially unchanged. Berlusconi brought to power a male model of political leadership that sexualized and spectacularized political action, while feminists mobilized in response to Berlusconi’s sex scandals as well as to the objectification and sexualization of women on television.

In this context, Giorgia Meloni, Flavia Perina and Daniela Santanché have written extensively about women and become party spokeswomen on gender issues. The qualitative analysis of the books they wrote in that period - Noi crediamo. Viaggio nella meglio gioventù d’Italia by Giorgia Meloni, Senza una donna. Un dialogo su potere, famiglia, diritti nel Paese più maschilista d’Europa by Flavia Perina (with Alessia Mosca), and Sono una donna, sono la Santa by Daniela Santanché – was complemented by the analysis of 3,000 news items from the LexNex database (including both newspaper articles and news gathered by Italy’s leading wire service Ansa). The data have been coded using a dedicated software and focusing on three main topics: the assessment of sexual difference and second-wave feminism, the role of women in the household and in the labor market, and reproductive rights.

Women’s rights prove to be a recurring topic in the stances that Meloni, Perina and Satanché took between 2008 and 2018. In their view, however, feminism is not suitable for protecting women’s rights. In fact, Meloni, Perina and Satanché all blame the decline of family values and the neoliberal objectification of women on feminist culture. As Sara Farris noted, women’s rights can be prioritized while dismissing feminism altogether, just like feminist claims can be used to support authoritarian or anti-migrant policies (femonationalism).

The discourses of the three MPs differ on the role of women in the household as well as in the labor market. While Meloni and Perina focus on traditional gender roles within a nationalist framework, Santanché supports the inclusion of women in the labor market as a form of emancipation. For her, women can achieve emancipation by using personal skills and individual self-will to climb up the ladder. In other words, women must simply aim high and follow through.

Despite these differences, the discourses of the three MPs lack a structural analysis of inequality as it is produced by the sexual division of labor. The costs of reproductive labor as it is currently organized in society are borne by women as private individuals: they can either externalize reproductive labor – if they can afford it – or give up their career or even quit their job. Either way, it is women who perform reproductive and care work, be they unpaid wives and mothers or (often non-white) domestic laborers who are (poorly) paid by women who can afford to enter the labor market.

In contrast, Meloni, Perina and Santanché describe paid or unpaid work as an individual choice that women can make in virtue of their natural qualities, such as nurturing abilities or the ability to juggle family and career. Similarly, the discourses on reproduction (especially regarding maternity and abortion) hinge on a pre-social, naturalized and essentialized idea of women. This is especially relevant insofar as Italy’s fertility rate is among the lowest in Europe (1.37 children per woman). Within this framework, access to abortion is seen as a failure of policies for maternity, which is in turn assumed to be women’s natural inclination.

Liberal elements within a conservative framework

On the one hand, the study shows that gender inequality and women’s rights feature prominently in the discourse of right-wing female politicians. On the other, the inclusion of suchlike issues in right-wing discourse is marred by contradictions and limitations. The conservative framing of liberal or neoliberal elements is what the authors of the study term “emancipatory complementarism” or, the support for a male breadwinner model while allowing for some light forms of work-life balance and free sexuality.

However, the proposed solutions do not include any change or transformation of the status quo since they neglect the structural, economic aspects of the problems they purport to address. In the books considered, the underrepresentation of women in the labor market is not blamed on structural barriers to access. Instead, it is presented as the consequence of a deliberate choice that women make to follow their natural propensity for nurturing. Hence a conservative political agenda.

Nonetheless, the selective inclusion of traditional feminist issues into right-wing discourse does not make feminism conservative. On the contrary, it allows the right wing to capitalize on women. In the absence of proposals for the redistribution of wealth, feminist issues must coexist with a hierarchical idea of society. This contradiction reveals why right-wing feminism is an oxymoron.

Elia A.G. Arfini is a Fixed-term Research Fellow (A) at the Department of Social and Political Sciences, University of Milan. His research focuses on gender studies and queer theories, with particular attention to trans experiences, and on cosumer cultures in the food sector. His publications include articles in the European Journal of Cultural Studies, Journal of Consumer Culture, Journal of Gender Studies, Rassegna Italiana di Sociologia, Studi Culturali, Transgender Studies Quartely.

Dating apps: love in the time of algorithms
Too late, too early. How prevention jeopardizes governments
The Euroskeptic vote grows with coalition governments
Prof. and social networks: "Regulating the life of teachers outside the Academia? It's not the army" - 5 minutes with Antonella Besussi
Europe without solidarity? It's like a dog without a tail
Why it is hard (if not impossible) to abolish the Council of State
NaspRead News, Covid-19 special edition
Social Europe: old and new (dis)agreements
Come on, let's be realists!
Who's old? Redefining old age with Sergei Scherbov
More
All Contributions