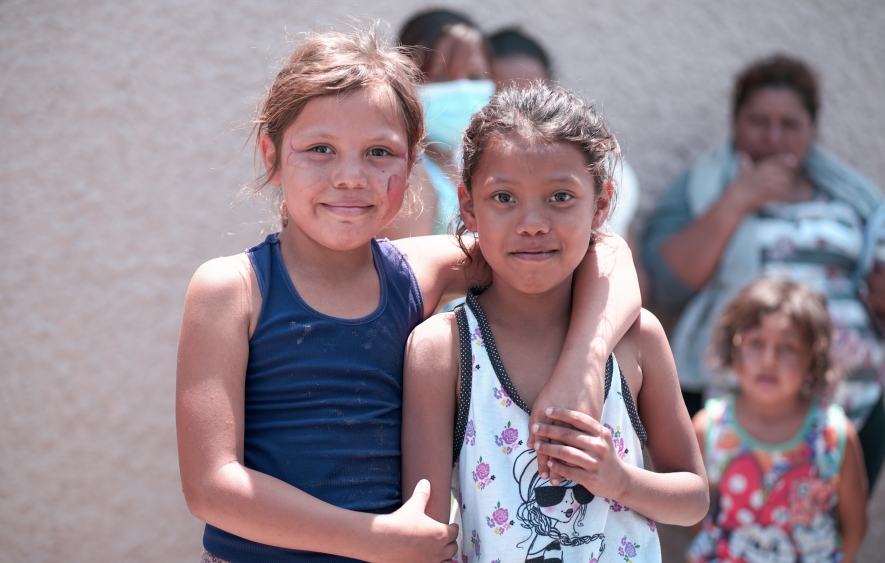 Refugees and migrants: how and why Europeans like reception more than is thought

European voters have contradictory positive and negative evaluations of asylum and refugee issues, a feature that suggests a tendency towards ambivalence in public policy preferences. On the one hand, Europeans appear to be strongly committed to providing humanitarian protection to people who flee violence and persecution. On the other hand, they are simultaneously concerned about the (mis)management of refugees and asylum policy and about ‘bogus’ asylum-seekers who threaten the state’s ‘control’ over immigration.

Public preferences regarding refugees and asylum-seekers are exceedingly difficult to study. They are a kind of Janus-faced phenomenon: humanitarian concern conflicts with perceptions of national interest. Generally, those who study policy preferences (for public policies) tend to imagine these preferences as arranged along a one-dimensional and bipolar continuum of increasingly positive or increasingly negative sentiments. Yet, in the case of asylum and refugee protection, this approach is limiting: it ignores the complex nature of preferences. When it comes to asylum-seekers and refugees, citizens' evaluations are simultaneously both positive and negative. This is because policies are inevitably 'multidimensional' objects, combinations of distinct characteristics.

This duality of attitudes makes the response data obtained by the usual survey methods unreliable and inconsistent. Citizens are often unaware of their own ambivalence. They often do not feel that policies involve some unavoidable trade-offs, that every acquisition and achievement also involves a loss and a cost. Moreover, the ethical aspects of asylum and refugee policies increase the likelihood that the preferences expressed reflect what is considered to be socially desirable: respondents are more reluctant to report their real opinions if they perceive them as not socially acceptable.

It is not all black and white: a ‘conjoint experiment’ takes this into account

In order to overcome these conceptual and methodological obstacles, we employed an original survey method (conjoint experiment) which makes it possible to identify precisely which policies Europeans prefer in relation to asylum and refugees, and to what extent their preferences vary according to the country of residence. The objective was to analyze not only which policies were most appreciated, but also why. Instead of asking respondents to evaluate each aspect of asylum and refugee policies separately from each other, we asked them to choose between hypothetical pairs of policies, each of which was an expression of different combinations of characteristics (dimensions). We were thus able to isolate the specific effects – on public opinion – of certain features of asylum and refugee policy. The experiment was conducted in 2019, and it involved 12,000 respondents distributed among 8 different population samples in Austria, France, Germany, Hungary, Italy, Poland, Spain, and Sweden. 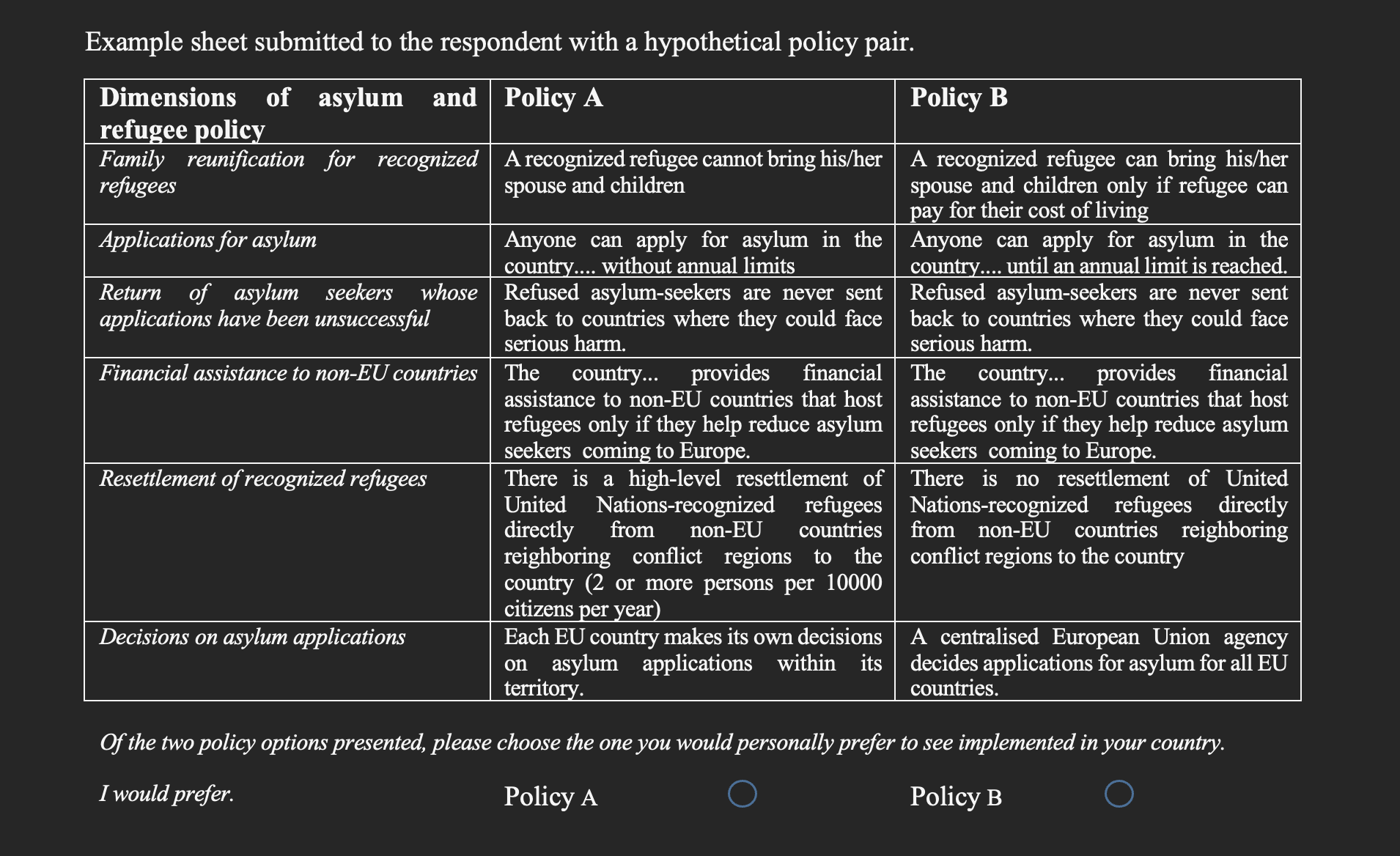 Welcoming refugees but with some limitations

Statistical analysis of the data collected during the experiment reveals that EU citizens generally like policies that provide protection for asylum seekers and refugees. There is no evidence of widespread support for zero protection and assistance.

For example, if the option of sending asylum seekers whose applications have been rejected back to danger zones is included in the policy, then public support declines compared to the opposite option, with other features of the policy remaining the same. Policies that offer no family reunification opportunities for recognized refugees also receive (slightly) less public support than policies that always allow family reunification.

This commitment to providing protection to refugees, however, is linked to policy features that allow for some form of control. On average, Europeans want to protect refugees but prefer policies with limits and conditions. For example, family reunification is more popular among EU citizens if refugees are required to cover the living costs of their family members than when this condition is not imposed. Similarly, European citizens express slightly more support for policies that provide financial aid to non-EU countries hosting refugees than for policies that deny such aid – provided, however, that those same countries help to reduce the number of asylum seekers arriving in Europe.

From Italy to Hungary, few differences

This pattern of preferences (i.e. the inclination for protection with limits and conditions) seems to apply in all the European countries that we investigated, both in the older member states and in those that have recently joined the EU. Even in Hungary – which since the 2015 refugee crisis has become notorious for the government's anti-refugee stances – public opinion supports policies that provide some conditional and limited protections (such as not being sent back to danger zones), rather than denying protection altogether. This similar asylum and refugee preferences between citizens of different EU countries contrast with the widespread idea that Europeans are unavoidably divided (especially between old and new EU member states) on how to reform asylum and refugee policies. The results of our research suggest that public support for asylum and refugee policies that provide protection and assistance can be created throughout Europe. However, for this to happen, more limits and conditions need to be introduced into policy design. Our study goes beyond existing approaches and shows that preferences for particular policies are neither the same as the unlimited and unconditional provision of rights and protections nor, conversely, the complete abandonment of those in need.

Who's old? Redefining old age with Sergei Scherbov
Trust at and outside work: traces of solidarity in the age of coworking
The King's Dilemma, a game that teaches that in politics there are no easy choices
Imperfect bicameralism: one in five bills passed by the lower house is not enacted into law by the upper house
Refugees and migrants: how and why Europeans like reception more than is thought
How citizens see political parties
Migrants, 3 out of 4 know someone dead during the backway journey but try it anyway: "Supernatural beliefs make people take risks"
Mercenaries: efficient troops or murdering savages? The changing reputation of contracted soldiers
Career journalists: does politics matter?
Late and ahead. How parents' age affects their children's education
More
All Contributions